Getting Wasted Has Real Consequences

Getting Wasted Has Real Consequences 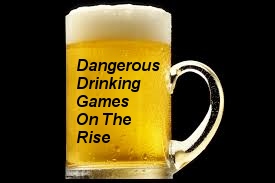 How do we help those people who intend to get very drunk and who enjoy getting wasted via drinking games? CNN posted a thought-provoking article about the culture we live in whereby people intentionally indulge in drinking games to become very intoxicated, post their exploits on Facebook, YouTube and other social media for fun, and even compete with each other to see who can do the worst things while drunk.

The CNN piece (which provided excerpts from social media videos – displayed below) shows a man being held upside down while drinking beer out of a toilet, a woman stripping down to her underwear in a grocery store and chugging beer, and another man mixing a dead mouse with alcohol in a blender and consuming the mixture. Some other young adult was reported to have drunk alcohol mixed with motor oil! Ridiculous? Or just plain stupid? These choices appear to be driven by a powerful need for attention and approval. “I’m a crazier drunk than you” seems to be some new badge of honor.

While critics of this activity may be accused of being old-fashioned or boring, consider that 5 people already died recently having taken up this new social media pastime. The CNN article covers several incidents in which young men got drunk at a bar and then decided to slide down a handrail instead of walk down the stairs. Each of them lost their balance, fell backwards, and down four stories below. They died of skull fractures. A total of three people since 2009 died in this manner after leaving the same bar. It raises the question of who is to blame. Is it the bar who served them alcohol? Is it the individuals themselves who chose to drink and then get on the handrail? We live in a country that proclaims its greatness based on a person’s freedom of choice. Individuals do make bad choices, but are sometimes compelled to blame someone else for the consequences of their mistake.

Also being scrutinized are the social media networks like Facebook who are accused by some as being complicit in endangering the public by allowing the drinking exploits to be distributed over their website. Facebook have stated publicly that they are not responsible for the behavior of others, but will examine the situation further. The CNN article quotes a Dr. Sarah Jarvis (from the UK) who said that she believes this new fad would simply fizzle out if the social media networks were to disallow the posting of drinking games. Practically speaking, it would be extremely difficult to monitor and review the millions of videos and pictures that are uploaded every week to the social media networks. Are we focusing our energy in the wrong direction?

In the end, adults must be responsible for their own decisions. Parents play a role, schools play a role, and our government plays a role. But in the end, each person decides who they are, what they will chose to do, and what they will stand for. Some people contend that our society’s standards of acceptable behavior are falling with every passing decade. What was outrageous and unacceptable 10 or 20 years ago is today considered sort of OK, even funny, among a large group.

With marijuana now legalized in some states, heavy drinking becoming the new internet sport, and opioid addiction reaching unprecedented heights across the country, our American communities may be in for a rude awakening as the decade unfolds. Parents must remain very vigilant & alert about their children’s social circles and use of social media. There are many influences in society today that can have a harmful impact on kids and teens.

Visit this page for information on Drugs of Abuse