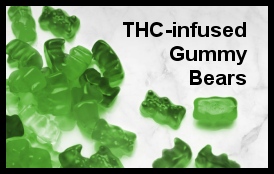 Eleven teenagers in Indiana were hospitalized after overdosing on THC gummy bears. 911 was called, and when they responded on the scene they found numerous teens hallucinating, experiencing blurry vision, rapid heart rate, and pain in their legs.

They all had ingested a half of a gummy bear that had been infused with THC (the active ingredient in marijuana). Drug tests revealed that each teen was suffering from an extremely high level of THC in their systems. It was reported that some teens had a heart rate of 200 beats per minute which can be very dangerous.

These drugs can be deadly as the user often has no idea what mixture of ingredients has been introduced or what effect these substances may have on them.

Recent stories have been published about heroin being mixed with elephant tranquilizer, fentanyl, and other potentially deadly drugs. This risk associated with drug use has never been higher with the U.S. experiencing unprecedented numbers of fatal overdoses.

The video below is coverage of this story by the local Laporte County news affiliate: