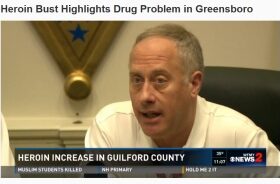 WFMY News2 broadcast an informative report (shown below) on the continued rise of heroin abuse and drug trafficking in the Piedmont Triad. On February 5, Guilford County deputies pulled over a man on I-40 and confiscated 8 pounds of heroin which had been hidden in the car’s battery. The estimated value of the heroin was