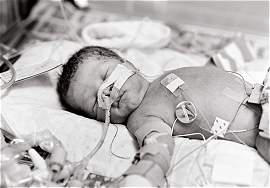 The Winston-Salem Journal has posted a story about the increase in infants being born to mothers addicted to heroin or other opioids. This trend is nationwide. The article explains that many of these infants are experiencing withdrawal symptoms after birth requiring hospitals to treat & stabilize the infants before they are released and sent home.

The study highlighting this problem came from the University of Michigan. Infant withdrawal symptoms are often treated successfully with methadone as the infant is detoxed from opioids gradually over a week or more. The study showed that rural newborns are at highest risk for being born to an addicted mother.

The Michigan study found that prevention and treatment services were specifically lacking for opioid addicted mothers who live in rural areas of the country. Past studies have found that babies born to mothers who are stable in a methadone program present with a much higher probability of giving birth to a healthy baby. Mothers in methadone treatment also are at a reduced risk of miscarriage and other complications compared to mothers who are not in treatment and using illicit opioids.

Pregnant mothers in treatment have much better access to community support services and are more physically stable while receiving methadone thus increasing chances of a healthy delivery. Street opiates are typically contaminated with a variety of adulterants and place the mother and unborn child at a much increased risk of accidental overdose and death.

The Winston-Salem Journal article points to the continuing need for more opioid-specific and medication-assisted treatment services in rural communities. A lack of treatment in rural areas leaves addicted mothers in the position of seeking and using dangerous street opiates to cope with their withdrawal sickness. This puts the unborn child at a terrible risk of birth defects, developmental problems, and possibly death.

The next year should reveal much about whether government talk of increased funding will become a reality …  or not.