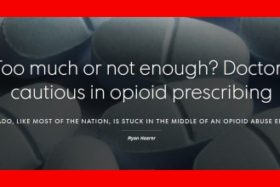 There is an enlightening article and video segment by Ryan Haraar (Colorado 9NEWS) on the rising problem with opioid overdose in America. The piece highlights that the United States comprises 5% of the world’s population, but consumes 80% of the world’s prescription opioids.

Presently, there is considerable discussion in the news about the origins of what eventually became a liberal policy in the provision of opioid prescriptions. Perdue Pharma has been cited as having been an advocate for the widespread use of Oxycontin in the 1990’s,  but a new article just out by The Denver Post points to a letter published in the early 1980’s in the New England Journal of Medicine in which a noted physician claimed that an extremely small percentage of Boston hospital admissions presented with a risk for opioid addiction.

This letter, which was widely distributed and referenced over time, is being pointed to as possibly first opening the door to what would eventually lead to a true American crisis: opioid addiction. You can read more about that here: How a 1980 Letter Fueled the Opioid Epidemic.

Today, there is a new vigilance and ongoing effort to educate physicians and pharmacists on the dangers associated with extended opioid use – even for legitimate pain management purposes. While this educational effort is underway, some physicians are still over-prescribing as illustrated in the first video link above.

At this point in time, the nation’s focus must be sharply directed to addressing the need to effectively manage opioid withdrawal syndrome in those who are addicted. It is the painful physical withdrawal from opioids that drives people to desperation – and eventually injectable heroin, high-powered fentanyl, and other high risk street drugs. Managing opioid withdrawal allows addicted individuals to experience relief from physical sickness, and the ability to then pursue stabilization and recovery.

The dilemma in managing pain is one that practitioners will be exploring for some time to come. The careful monitoring of opioid prescriptions is likely to become a heightened priority for the medical profession in the years ahead.