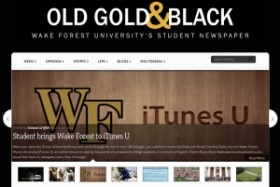 A feature article by Alex Spear of Wake Forest University’s Student Newspaper reveals a shocking level of alcohol abuse occurring on local college campuses. In the piece, published January 15, Alex depicts the typical visuals of walking around the BB&T sports field and seeing fresh & dried vomit and crushed beer cans in plain view. Alex points out that this is seen before noon.

The article goes on to describe what is referred to as “Senior Fifth”, a campus tradition in which students try to finish a fifth of alcohol before the last football game of the season. Alex writes:

“Each year since 2003, over 50 percent of Wake Forest students have admitted to blacking out on a regular basis.”

The Dean of Students at Wake Forest, Adam Goldstein, is reported to have confirmed that while binge drinking rates have dropped across the country, they have actually increased at WFU. He adds that substance abuse violations on campus reached a five year high this past semester. There was one recent weekend in which 15 hospitalizations occurred due to student substance abuse.

These are obviously alarming statistics, and they further validate the need for stepped up substance abuse education and treatment in our local Piedmont Triad communities. Part of the battle with youth substance abuse today is the all too frequent glorification of ‘partying without consequences’ that is depicted on TV, in movies, music videos, and in songs. There is also a well-hidden subculture available to teens via facebook and other online social media sites that tends to promote risky behavior and a “can you top this” type of challenge in regard to abusive drinking.

It has become moderately easy for teens and young adults today to gain exposure to elements that promote high risk behavior. Without active community education and deliberate efforts to curtail youth exposure to adult lifestyle & themes, teens will often gravitate to these things. They are promoted heavily on the internet and in all forms of media.

If the recent trends at Wake Forest are regarded as an indication of teen proclivities, then more certainly must be done to turn things around.

For more on this topic, see: Getting Wasted Has Real Consequences