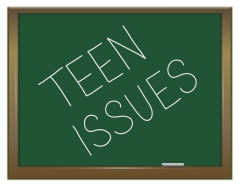 The world is one huge adventure for most kids in the 13-19 age range. As adults, we must remember that teenagers are only a few years beyond childhood. Many teens have not yet acquired good internal controls or a reality-based view of the world around them. Yes, some teens are mature beyond their years, but the majority have just barely begun to move forward with critical thinking, and they have a long way to go.

Teen brains are developing and changing every day. And teens face many important developmental milestones: puberty, a shift in concrete thinking to more abstract thinking, developing a more intact conscience that guides choices, as well as learning to delay gratification (impulse control) instead of acting haphazardly without consideration of future consequences. As a kid, many of us heard the familiar saying, “Think before you act”. The reason it is said so often is because teens frequently do the opposite of this. They act without thinking.

When it comes to experimenting with drugs, a teen’s decision will hinge on a combination of factors. One of these factors is the prevailing social norms of the time, and another closely related factor is what their friends think and do (also known as peer influence). This is a powerful force.

The Partnership at DrugFree.org just published the results of a survey in which it was found that:

Why do fewer teens think this? There are a considerable number of people in American society that use marijuana and would like to see it legal to do so. Many of these people trivialize the risks of marijuana due to their own denial or simply because it serves their needs and desires. There is also a money-making entertainment industry that profits greatly from marketing a fantasy lifestyle to teens via movies & music that glorifies drug use & partying. Living on the edge is portrayed as fun, has no consequences, and is just what the “cool” kids do.

Adding to the dilemma of youth using drugs is the disturbing trend of greater numbers of teens dropping out of high school and abandoning their education. This then leads to chronic unemployment, low wages, and a host of other social problems that build cumulatively through the years.

If teens believe it is socially acceptable to smoke pot and that regular use of pot poses no great risk, then the number of teen users will continue to swell. The same occurred years ago with cigarettes. Scores of people smoked because it seemed completely innocuous and with no real ill effects. It was the generational “in” thing to do, and young people felt like it made them look grown up. We learned better … the hard way.

Marijuana is addictive. Marijuana negatively affects neurological functioning, memory, concentration, general cognitive performance, and motor skills. For youth, the risks of drug use are even greater than they are for adults. A nation of pot smokers might be a humorous concept for fans of Cheech and Chong, but there is another reality at play everyday and in every community across the country. Kids smoking pot undermines their future and their potential. Teens often have a feeling of invincibility and the false assumption that nothing bad can happen to them. Teens were just children not that long ago.

Teens that regard regular marijuana use as no big deal are not facing facts, and this is a problem for them, their parents, and society. Sanctioned drug use and legalization are complex issues for sure. But helping teens stay on track and mature into responsible, productive people should be the concern of every adult. What message are we giving our children when fewer teens see no great risk from being regular marijuana users? With lower expectations comes lower performance. Permit and encourage anything, and anything is bound to happen.