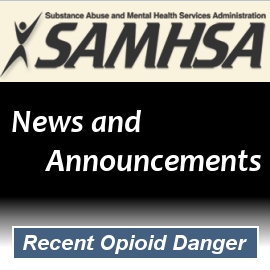 Below is a recent message from Dr. H. Westley Clark, Director of the Center For Substance Abuse Treatment, on a dangerous drug mixture which has already resulted in numerous overdose deaths around the country. While this message was targeted to treatment providers, it is relevant information for the entire community. Please share this cautionary message with others.

The Substance Abuse and Mental Health Services Administration (SAMHSA) is alerting the treatment community and the general public that since the beginning of the year a marked increase in deaths reportedly linked to the use of heroin contaminated with the drug fentanyl has been noted. Fentanyl is a form of opioid and when used in combination with heroin can rapidly cause severe injury and even death.

There have been more than 17 deaths linked to the possible use of fentanyl-contaminated heroin in the Pittsburgh, Pa. area alone since January 24, 2014. In the first two weeks of January there were 22 such deaths reported in Rhode Island. It has been observed that these trends can expand quickly to include large and more distant geographic areas of the country. As yet the origin of the fentanyl is unknown but additional deaths have been reported from New Jersey and Vermont.

Heroin is always an extremely dangerous drug of abuse because it subjects its users to a wide array of risks such as overdose and increased exposure to Hepatitis C and HIV/AIDS and other infectious diseases. It often contains other ingredients which render it even more potentially harmful – or in some deadly.

SAMHSA requests treatment providers to alert their patients and greater community stakeholders to be alert to the increased risk of fatal overdose. SAMHSA released an Opioid Overdose Toolkit late last year. It contains information on recognizing and responding appropriately to overdose. The Toolkit presents information on recognizing and responding to overdose in a manner suitable to a variety of stakeholders. It can be read or downloaded to print and share at: http://store.samhsa.gov/product/Opioid-Overdose-Prevention-Toolkit/SMA13-4742.

I recognize that as treatment providers you are daily engaged in providing the most effective form of overdose prevention: medication assisted treatment. Achieving recovery remains the best method for preventing fatal overdoses and other risks.
————————
Read Heroin and Prescription Drug Overdose for more on recent drug abuse trends and overdose concerns.